"After the Holidays" charm swap

Charms are so tiny, I could not even imagine making one... I looked around and found a lot of sites with handmade charms. These sites are awesome... the charms made have so much energy and time put into them. Some of these charms are made of Christmas Lights, bottle caps. scrabble tiles you name it, it can be turned into a charm...

I decided I wanted to try this... so instead of just making one or two I signed up for a swap and had to make 20 yep that's right 20!! For someone who has never done one or was ever into making jewelry, making 20 was beginning to sound like a million!! What do you use to make charms... well I needed wire, pliers and a bunch of other tools.

Well after about 2 weeks of non-stop charm making I did it!! The end result was awesome... 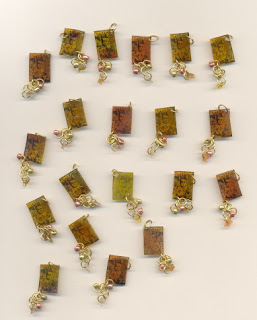 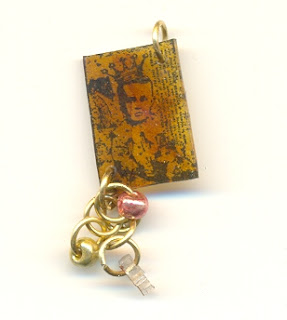 I made my charms with shrink plastic. I colored clear shrink plastic with lettuce and butterscotch alcohol inks, then I stamped the image with Staz-on ink onto the plastic. I used my heat gun to shrink them up rather then the oven. After shrunk I drilled holes in each with my dremel (luv my dremel) Clipped on the jump rings and some beads. I also punched out some crowns in the plastic and shrunk them down, then drilled a hole in those to hang... they are very hard to see because they are so tiny. I hate that my scanner scanned such a bad picture of my charms, they really are much clearer then the scan shows...

Now that I have all these new tools, I cannot wait to sign up for my next charm swap!!
Posted by Mel♥ at 9:02 PM

I love your charms. I can't believe it's the first time you've made charms. I hope to see you around other charm swaps. I'm making charms for swaps myself. I love my dremel also. Great work, I look forward to seeing more of your charms.